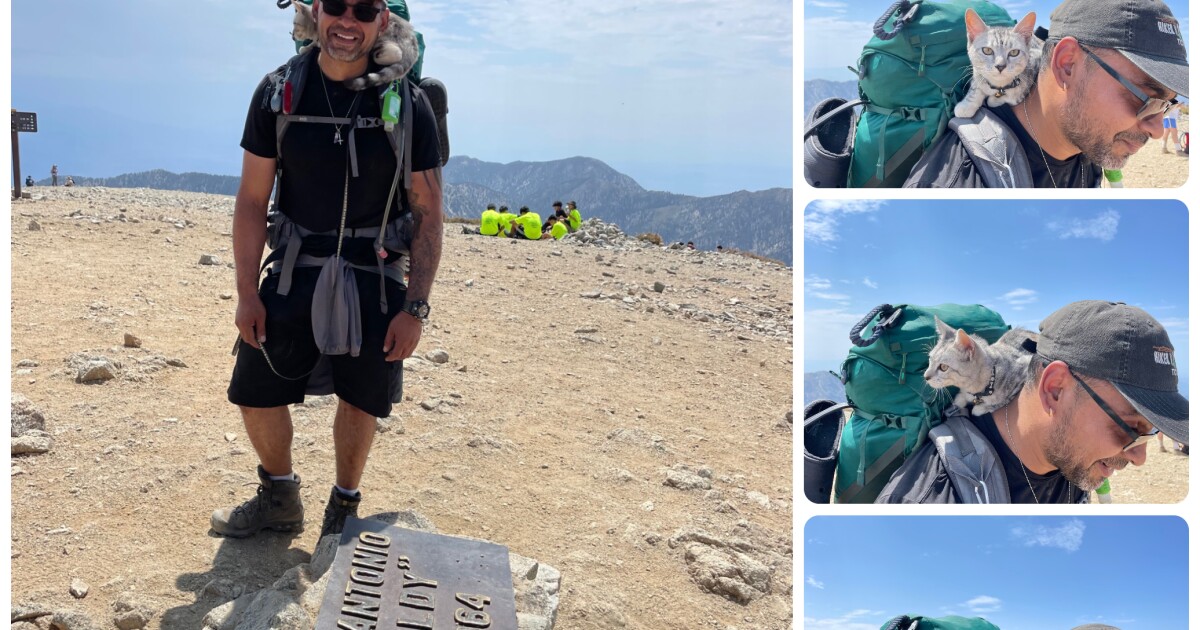 Lumi and I locked eyes. What was she doing atop Mt. Baldy? I’ve seen many dogs make it to the 10,064-foot summit, but this was the first time I’d spotted a cat. To be clear, Lumi wasn’t doing the walking. The 4-month-old offspring of a rescue cat was happily ensconced on Luis Vargas’ neck. He and Mirian Rios were on an overnight backpacking trip when I met them at the peak. “She enjoys being out here,” Mirian said. Me too.

Turns out, hiking cats aren’t all that unusual. Some smart kitties have Instagram accounts, such as @littlegreysadventures (look at that cool carrier with a porthole window), @backpackingkitty and @adventurecatsorg (“living nine lives to the fullest”).

How to get started? Begin with training and a good leash/harness, according to these tips for the trail. REI offers online advice that points out cats aren’t built for endurance or long-distance walking. “Even the bravest, sturdiest cat is almost certainly going to need carrying some of the time,” the website says. Bottom line: Make sure you have a good backpack or carrier when taking your cat on the trails.

It’s not a slam-dunk that your cat is going to share your love of the outdoors. From the REI tips: “No two cats are the same. Some felines may love accompanying humans on adventures, while others may be more comfortable close to home. … Pay attention to your pet and cease outdoor activities if you notice signs of stress.”

4 things to do this week

1. Take a shady hike to beat the heat. It’s absurdly hot, but you want to hike. I get it. I do too. But unless you’re willing to tackle strenuous hikes that take you to 10,000 feet for a cool-down, you may feel fried on most L.A. trails — except these. Few trails are completely sun-free, but these 10 offer you a shot at shade, that rare SoCal commodity. Most are short and easy, shaded by oaks and sycamores. Switzer Falls in the Angeles National Forest is popular (go midweek or early in the day) because of the towering waterfalls that are good for a refresh. Check out the list, pack plenty of water and be prepared to turn back if you get overheated.

2. Go disco roller-skating with live DJs at this L.A. botanical garden. “There’s a wormhole to 1979 just a short trip down the coast from LAX. Step inside and discover a hypnotic world of disco, glitter and roller skating where ‘music flows and magic grows.’ Here, L.A.’s coolest lewks come out; everyone boogies. Music up, inhibitions down,” according to this L.A. Times story. It’s all happening on selected evenings at the South Coast Botanic Garden on the Palos Verdes Peninsula. Rock and Roll Hall of Fame musician Nile Rodgers was one of the drivers behind the pop-up DiscOasis, which continues on selected nights through Sept. 6. Timed tickets start at $49, with VIP upgrades, and $29 options for early birds. More information here.

3. Outdoor Shakespeare is back in Griffith Park. Miranda will work out her daddy issues with Prospero as a storm brews in “The Tempest,” now through Sept. 5 in the Old Zoo area of Griffith Park. The Independent Shakespeare Company returns with free summer performances, with a few changes. Visitors must sign up in advance for free tickets because of COVID-driven restrictions on audience size. (The website explains how to get tickets.) Don’t miss the shipwreck-themed dress-up night Aug. 28 and a preview of Black Shakespeare on Sept. 3. It’s the stuff dreams are made of — Shakespeare says so.

4. Sign up for a (virtual) walk in the woods with a naturalist and a California officeholder. Naturalist, artist and author Obi Kaufmann and Wade Crowfoot, California’s secretary of natural resources, took a walk in the woods (specifically the Sierra Buttes, east of Downieville, Calif.) to engage in a dialogue about the environment, including wildfires and water shortages.

Here’s how a news release describes the mash-up: “When a naturalist with a breathtaking artistic vision and a political pragmatist with 19,000 employees and a $4 billion budget come together to solve pressing issues of California’s lands, where do they begin?” Sound familiar? It should.

More than a century ago, nature-activist John Muir and President Theodore Roosevelt spent three nights camping together in what is now Yosemite National Park. It’s not known exactly what was said, however, Roosevelt later “signed into existence five national parks, 18 national monuments, 55 national bird sanctuaries and wildlife refuges, and 150 national forests,” according to the National Park Service.

The modern-day trek is meant as a tribute to the camping trip that changed everything for land preservation in the U.S. Sign up for a screening of the trip (it’s pre-recorded) and a live Q&A with Kaufmann and Crowfoot. It costs $10 per ticket and will stream at 7 p.m. Pacific time on Sept. 9. All are welcome to attend. More info here.

Maybe you’re still trying to figure out a summer getaway amid the scary California wildfires and drought, as well as renewed precautions because of the spread of the Delta variant of the COVID-19 virus. Don’t give up. We found good outdoor options you may have overlooked: lakes in the central Sierra. Specifically, Bass, Shaver and Huntington. “These beautiful alpine destinations — each with its own vibe — are a short drive from one another, making a tour of all three doable in less than a week,” this L.A. Times story says. Wait, three lakes in a single trip? Sweet. Check out the full story that includes where to stay and where to eat at each destination.

Times travel writer Christopher Reynolds went north in California — waaaay north — to find the best beaches and offbeat attractions for his list of 22 fresh coastal travel ideas. My faves: The 49-foot-tall Paul Bunyan and Babe the blue ox that guard the entrance to the much-hyped Trees of Mystery, which also has a canopy trail that allows you to walk in the upper reaches of the redwoods. It’s near Klamath, just short of the Oregon border. Farther south is Glass Beach, officially known as Noyo Headlands Park, in Fort Bragg, “full of green, brown and frosty white pebbles that once were glass bottles.” Yep, the area (a former dump site) is covered in sea glass. Read about all 22 coastal stops here.

I haven’t made this camp dessert yet, but it looks yummy. Alex Geller in Backpacker magazine shares a recipe for apple pie on a stick. It looks pretty simple too (something I like when I’m planning camp meals). Mix cinnamon, cardamom and ginger before you go camping and then load up on Jonathan or Rome apples (share the weight with others, if you are backpacking). Bring a sturdy wood skewer to roast the apples over a flame. I like this recipe because it skips dehydrated desserts in favor of a fresh take. One snag: Many places in California don’t allow campfires because of high fire threats. Geller says the recipe also works with a wide-burner camp stove, where you can roast the apples over low to medium flame. Here’s the recipe.

If you visit Point La Jolla, steer clear of the sea lions. It’s birthing time now through October. The area between La Jolla Cove beach and Boomer Beach is off-limits until Sept. 15. “The closure is intended to protect both the public and sea lions during pupping season, a sensitive period of time when sea lions are born and learn to swim,” San Diego spokesman Tim Graham told The Times. “Sea lions, especially mothers who are nursing and feeding their young, can become aggressive and cause bodily injury when they feel threatened as a result of visitors that get too close.” Read the full story here.

Send us your thoughts

Share anything that’s on your mind. The Wild is written for you and delivered to your inbox for free. Drop us a line at [email protected]

Click to view the web version of this newsletter and share it with others, and sign up to have it sent weekly to your inbox. I’m Mary Forgione, and I write The Wild. I’ve been exploring trails and open spaces in Southern California for four decades.