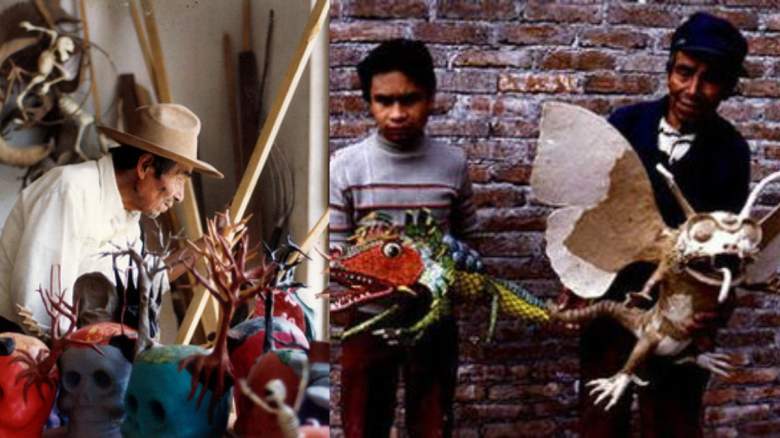 Pedro Linares Lopez in his workshop and with his grandson.

Pedro Linares López was a Mexican artist who is being celebrated with a Google Doodle on what would have been his 115th birthday. He was known for animal sculptures known as alebrijes. Linares died in 1992 and his family have helped keep his work and artistic style alive in the years since.

According to Google’s Doodle blog, “Today’s Doodle celebrates the 115th birthday of a Mexican artist who turned his dreams into reality, Pedro Linares López. His peculiar yet playful animal sculptures known as alebrijes are beloved worldwide as unique products of Mexico’s folk art tradition. … Thank you, Pedro Linares López, for showing us the power of imagination!”

Emily Barrera/GooglePedro Linares Lopez is being celebrated with a Google Doodle.

The Doodle was designed by Doodler Emily Barrera, according to Google. She said in an interview about the Doodle, which can be seen above, “Alebrijes and cartonería are very iconic and representative of Mexican culture. I was delighted to create a whimsical alebrije for Pedro Linares’ Doodle. It also felt really rewarding to do something that is strongly tied to Mexico, making me feel more connected to my country. I find it very magical and satisfying to make an alebrije from scratch, using your imagination, several simple household materials and your hands to make a physical object. Working on this alebrije made me admire even more the beautiful work of all the cartoneros in Mexico.”

Barrera added, “Pedro Linares gave alebrijes their name and inspired many others around the country to start creating their own alebrijes. Linares’ alebrijes were made by mixing multiple animal body parts, such as using a snake body, rooster’s beak, bat wings, lizard legs, bull horns, etc., having as a result a unique creature. I find his work very interesting and eerie, and I wanted to honor him by creating an alebrije by taking inspiration from his most iconic pieces. His alebrijes tend to display open mouths, showing the creature’s pointy teeth and the tongue pointing outward, they usually have wings, claws or hooves and have very detailed patterns and colors.”

Here’s what you need to know about Pedro Linares López:

Pedro Linares was born June 29, 1906, in Mexico City, Mexico. His father was also an artist and he followed in his footsteps. Linares told the Los Angeles Times in 1991, “My father was also a cartonero, but he made only masks, little horses, very simple things–he was not a sculptor of papier-mache. What I began is very different from anything that was done back then.”

According to the Mexican Secretary of Public Education’s website, his mother and grandparents were also artists and inspired his work. His original art was made with paper, the way his family had previously made sculptures.

Mariposa Arts writes, “After earning a living by making piñatas (to be smashed) and Judas figures (to be burned) on specific holidays, he became a cartonero, a maker of papier-mâché fantasy figures, and, ultimately, the inventor of the alebrije, the now internationally famous and widely collected icon of Mexican folk art.

Manuel Aguilar, an art history professor at Cal State Los Angeles, told the Los Angeles Times in 2016, “It’s the most authentic, the most true art of the Mexican people. It is the spirit of the artist that is embedded in those pieces.”

2. Linares Said He Created Alebrijes After Encountering the Fantastical Creatures in a Fever Dream

Google writes in its blog post about Linares, “In 1945, as Linares tells the story, he became very sick and drifted into a fever dream. There he encountered fantastical creatures who shouted in unison a nonsensical phrase ‘Alebrijes!’ Upon his recovery, he set out to represent these mythical beings in sculpture. The jarring sculptures initially met little success, until over time, Linares refined his alebrijes into the colorfully patterned combinations of reptiles, insects, birds, and mammals recognized today in today’s Doodle artwork.”

Doodler Emily Barrera added, “There are various types of alebrijes created throughout Mexico, which are usually made with papier mache/cartonería or wood carving. Alebrijes can depict fantastical creatures, animals, humans, skeletons, etc., but for this specific Doodle I wanted to mainly focus on Pedro Linares’ work.”

Linares told the Los Angeles Times in 1991, “I saw them in a dream. They were very ugly and terrifying and they were coming toward me. I saw all kinds of ugly things.” According to the Times, “Linares says he had that single dream toward the end of an extended illness–he had fought gastric ulcers for 11 years, and at one-point in 1945, was thought to be on his death-bed. He says it was while he was in a 24-hour coma-like state, surrounded by candles, that the alebrijes were born.”

Linares added, “They were very ugly. They weren’t like the calaveras. Calaveras are familiar–we are all calaveras underneath, so they sold very well. … But people didn’t want to buy the alebrijes. They were too ugly. So I began to change them and make them more colorful. But I wouldn’t stop (making them) just because people thought they were ugly.”

3. Linares Was Admired by Fellow Legendary Mexican Artists Frida Kahlo and Diego Rivera & Shot to Fame After He Was Featured in a 1975 Documentary

According to the Mexican Folk Art Guide, “Pedro Linares’ work sold locally for many years counting customers like Diego Rivera and Frida Kahlo until a documentary film made by Judith Bronowski in 1975 gave him international fame.” The documentary was called Pedro Linares: Artesano de Cartón, which translates to Paper Mache Artist.

In the Pixar film, Coco, alebrijes were portrayed as spiritual guides. Now This News writes, “Alebrijes are not actually something Mexicans believe in. Them being spiritual guides in the afterlife was just Pixar taking creative liberties with a very popular type of folk art in Mexico. Alebrijes have different elements from different animals such as dragon bodies, bat wings, wolf teeth, deer antlers, fish fins, and dog eyes. They’re also painted with vibrant colors and feature detailed patterns. They come in different shapes, sizes, and have faces that exhibit a range of emotions. So you’ll never find two that are exactly alike. But, they’re still nothing more than art.”

Linares’ creations are now used as decorations during El Día de los Muertos, or Day of the Dead, celebrations, according to Now This News.

According to Magia Mexica, Bronowski opened a workshop for Linares and his family in the 1980s after the popularity of her documentary. The website writes, “Oaxacan artisans are more familiarized with wood carvings (more specific Copal trees), that’s why alebrijes now are mostly known and made with this material than paperboard ones.”

4. Linares Was Awarded the 1990 National Prize for Arts and Sciences in Mexico 2 Years Before His Death at the Age of 85

Linares was awarded Mexican National Prize in Arts and Sciences in popular art and traditions in 1990. Before his death, Linares traveled around the United States and Europe, displaying his art.

Patrick Polk, the curator of the Latin American and Caribbean popular arts section at the Fowler Museum, told the Los Angeles Times in 2016, “You have these impulses in Mexican traditional art forms of folks working out wild animals and amazing creatures. There’s connections that go back to pre-Columbian-like aesthetics and ideas of the supernatural. There’s deep, deep roots.”

Polk added, “The ability of the artist to conjure things that move out of the mind, to present the fantastic. To challenge folks. To make sense out of it and revel in the creativity. The ability to fashion the fantastic. These creatures break those boundaries.”

Linares died on January 26, 1992, in Mexico. Alebrijes made by Linares for Kahlo and Rivera are now at home in the Anahuacalli Museum, according to AD Magazine.

5. Linares’ Children & Grandchildren Have Continued His Legacy by Crafting Art in His Unique Style

Linares’ children and grandchildren have followed in his footsteps, continuing to create art in his fantastical style and displaying it at galleries around the world, according to the Los Angeles Times.

Eli Barta wrote in 2018 on Mariposa Arts, “Nowadays these fantastic creatures are being manufactured by both men and women. Don Pedro’s wife only helped, but his three sons Enrique, Felipe and Miguel learned the art from their father. Now, in Miguel Linares’s family, it is different: his wife Paula García makes alebrijes and many other items such as calaveras or piñatas and has herself been creating figures, generally on her own, for more than fifteen years. Her two daughters, Elsa and Blanca Estela, and her son Ricardo, have also learned the art of making cardboard figures. Blanca got married and abandoned the art for a time, but a few years later she separated and went back to her parents’ home and the craft.”

Ricardo Linares told Estil Mexicano in 2015, “I began to be interested in Alebrijes at the age of 8, it interested me because within me there was a lot of curiosity. My father and my grandfather always asked me to help them and I helped paint, I started doing the simplest thing, which was a toy store, masks, judas, skulls, among others. My first Alebrije… I don’t have it anymore. I sold it to a teacher named Eva Martínez, a collector of popular art, one day while visiting my grandfather’s workshop she saw my piece, she knew it was my first Alebrije and she asked me to sell it to her and I sold it to her. Years later, he invited me to his house and showed me the place where he had it, from there I felt something very beautiful and I really liked this work and I started, I began to create.”